"I have a dream too, to built a Pascal Foundation for the Arts and Environmental Education which goal should be to help and promote children to express themselves by painting and being concerned by the environment...
I've already worked in this way with many children drawing contests but it's a huge goal. We're working on it !"

Results of the French CONTEST,
Pascal launched a new contest with kids (during the Paris Dive Show in January 2008 and with the Gumbo Limbo Environmental Complex of Boca Raton (Florida, Dec-March 2008), based on: “I’m drawing endangered sea turtles”.
Rules and were downloaded files on Paradise-Plongee.com on Pascal’s Foundation website. End of the contest was March 31st. Prizes from sponsors as Pascal Lecocq Foundation for the Arts and Environmental Education, and Nausicaa Centre de la Mer, won by Ines B. 6, from Paris, Margaux L. 4, from Dennemont, and more. 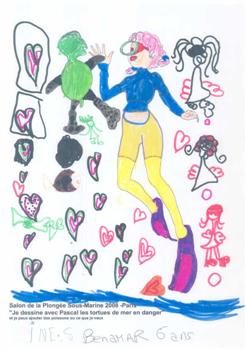